The evening darkness drops down like a cloak earlier and earlier as Autumn rolls in.  And this is certainly the time to stay by the fire and be entertained by stories on the page or screen.   Wrap up warm, settle down and let yourself be taken away with tales of other worlds, of talking creatures, of brave children…
So it was, with great pleasure, that I was asked to create some props for the latest BBC/HBO production of ‘His Dark Materials’, a beautiful example of an alternative world, first screened in the UK on 3rd November 2019.

The classic series of fantasy novels was written by Phillip Pullman in the 1990’s. The books follow the journey of two children, Lyra and Will, through multiple parallel universes – from the golden streets of an alternative Oxford to the icy deserts of the Arctic – and feature personal daemons, calculating witches and fiercely armoured polar bears.

‘His Dark Materials’ has been adapted for primetime TV by BadWolf Films and has a starry cast including James McAvoy, Ruth Wilson and Lin-Manuel Miranda. My own work appears too, in a very small form, as props within this lavish production.

The ability to create alternative but believable worlds is often called for in the work of an illustrator. For this commission, I was asked to create a map showing the waterways of Oxford to be used in a scene by the Gyptians – a community of waterboat gypsies. Just as Pullman’s world is believable in the book, it’s believable in the TV production too and every design detail has been meticulously thought through by the art department. This parallel Oxford is smaller than that of ours – I looked at maps of Oxford from the 1930’s for an idea of size for example.  Maritime charts were an inspiration – what would be important for river-travelling people to include in their maps?  Any lettering was hand drawn and I could only add it sparingly; the Gyptians, a people without great literacy skills, would have minimal use for words and certainly no need to label roads.

The map was delivered in a plain black and white form and became part of the backdrop in an interior of a boat scene. For my own satisfaction, I later decided to hand tint the original and added some further lettering although it would not appear like this in the production.

My next commission was to illustrate the ‘face cards’ of a suite of Gyptian playing cards. The Jack, King and Queen had to be shown with a daemon – a familiar animal that takes on elements of its owner’s personality in the ‘Dark Materials’ world.  Original artwork can be adjusted by the head designer so my cards were likely made to look well used, a little torn at the edges and beer stained.  I know that some colours too, were changed in keeping with particular dye colours the design team had decided were available in the alternative world. Skin colour was also adapted to reflect a more multicultural community and cast. 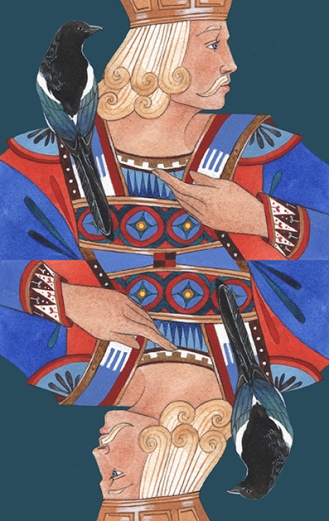 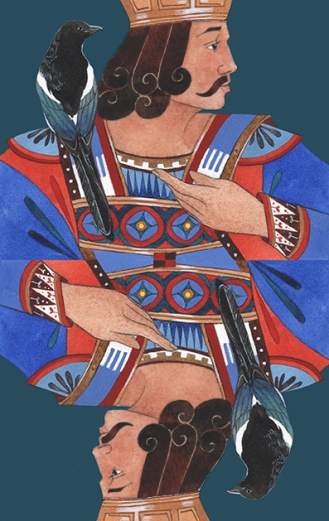 I always watch out for my props on TV. Sometimes I see them. Sometimes I don’t. But – regardless of whether I spot the map and cards on ‘His Dark Materials’ – from my own universe by the fire, I will certainly enjoy appreciating all the thought that went into visualising this other, incredibly rich, alternative universe originally created by Philip Pullman and brought to life by BadWolf Films.

This site uses Akismet to reduce spam. Learn how your comment data is processed.