In the Summer of 2018, Towner Art Gallery ran a project called ‘I Love Eastbourne’, encouraging Eastbourne inhabitants to think about what they loved about where they lived and, may be, even encouraging them to fall in love with the place again…

Using a researcher, they gathered positive data and collected conversations which were eventually turned into a mass of bar charts and lists.  I was commissioned to create this map of Eastbourne to turn the data into something warm and beautifully visual.

The map needed to show all the distinct civic areas in the town, (the ‘wards’), notable features in the town such as the station or the theatres, include some of the information collated as bar charts and some quotes taken from the gallery visitors.

It wasn’t an easy task. There was so much information additional to the usual map information I needed to consider. I had to find the best way to represent it clearly.

I took a leaf from the artist map makers Adam Dant who is contemporary and Macdonald Gill who worked mainly in the first half of the 20th century. They both use the written word frequently in their maps and often present it within a banner form. I kind of like the way banners give maps some movement and highlight the text as part of, but apart from, the map itself. For my map, the quote banners, feature banners and banners naming wards were delineated using distinct shapes, colours and lettering style. 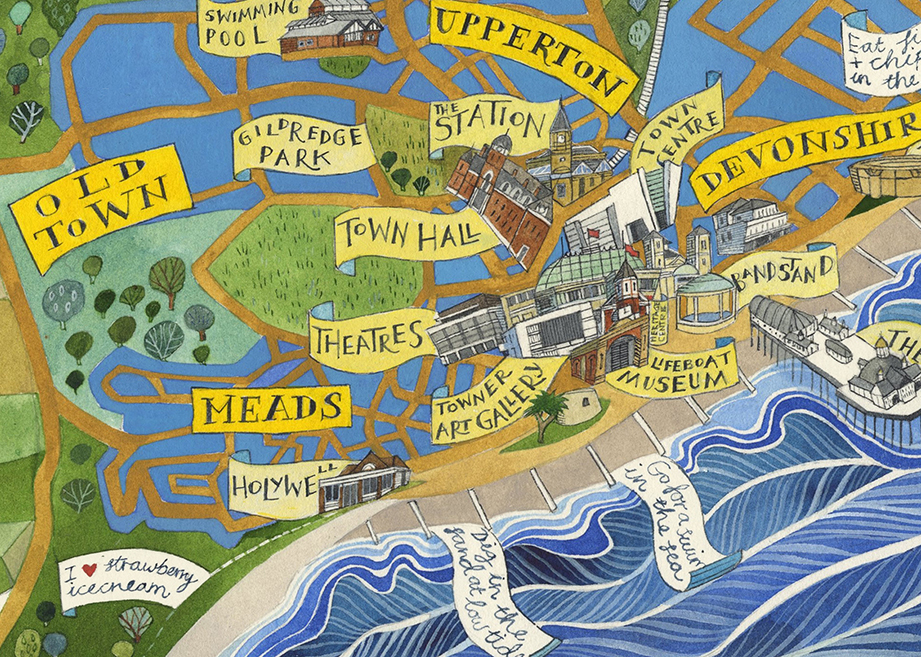 Lettering was also important for the cartouche – an extended title banner proclaiming an elegant ‘Eastbourne’. The typeface had been specially designed by Kate Whiteman for Towner,  purposefully reflecting the font of an old map of Eastbourne in the gallery collection. A steady hand was needed to replicate the parallel lines of the engraved look but I think it was worth it.

As you can see from the above, there was also a decorative border to the map. I decided that the best way to incorporate the information from the bar charts was to convert them to pie charts. These could then be presented as decorative discs for each ward and appear regularly as visual stop points around the frame which was inspired by high Victorian pattern.

The map was painted and hand lettered in watercolour, gouache and ink and came in at just over A3 in size. The original was bought by Towner and prints are planned to be sold in the gallery shop.

From a visitor’s viewpoint, Eastbourne is a beautiful place. It still retains its elegant facades and pretty curlicued street lamps. Metal railings are painted a bright glossy blue and the pier stands grand with its golden domes. The beach is clean and the green and white of Beachy Head and the Seven Sisters can be seen hazily in the distance. There is so much to like about the town; so many parks, so much culture, so many active opportunities… I hope the work done in the ‘I Love Eastbourne’ project has helped to highlight all of those good things and that the people of Eastbourne can look at the map, showing all of that positive data, and be extremely proud of their town.

This site uses Akismet to reduce spam. Learn how your comment data is processed.